4 Ways to Voodoo Floss your Knee

How To Voodoo Floss Knee

Before we start exploring different voodoo floss knee techniques, we encourage you to read this clinician's report on voodoo flossing  during knee pain. 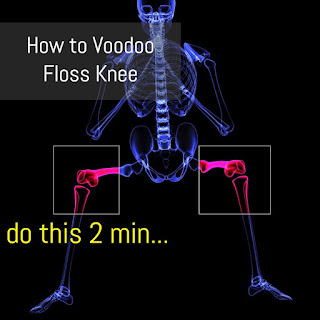 Voodoo Flossing for Knee Mobilizing in Open and Closed Position

Hey, guys, Dr. John Russin, back with T-nation, we're talking about compression and elevation to alleviate some knee pain, some knee swelling after your lower body days, squat days, whatever it may be. So ice has kind of been debunked and the rest has kind of been debunked. So the best way to get after it is using a little bit of voodoo floss around the knee joint itself. So I'm going to show exactly how to put this on and then what to do to drive some of the swelling out of there, but also to work on the mobility while we're at it.
So we're going to start the voodoo floss bands down on the calf, make sure that you start it and you're putting about 50 percent tension into this. So we're going to wrap with a little bit of overlap each time. This is a very important aspect. We are not going to tape down this patella. We're going to leave the patella alone, that kneecap alone, and we're going to wrap above and below notice as I wrap my knee is at slight flexion.
So we don't want a full straight knee on this one. So we're going to wrap and then tuck this right in. This is our starting position for the floss. So what we want to do is get this in the position where we can flex and extend from a passive position. So I'm going to lay down on my back here, got a bench set up in a place, the knee right up under the bench. And I'm simply going to extend the knee, bringing the toes back towards me and flexing the knee with the hamstring: extend..., flex...
You're going to spend some time doing this. So this is an active muscle pump. So we're trying to move that fluid out from the knee and put it back up into circulation. So spend a couple of minutes here. After you do that, we're going to come back up and try to translate this into a good functional position. So we're going to be sitting down at the bottom of the squat. I just want you to move around a little bit, oscillate the knees and spend about a minute or two in this position. After that's done, we're going to take off the floss and you're going to recheck range of motion in the swelling.

Tack and Floss for the knee with Kelly Starrett

Hey, welcome back to the Mobility Project, a special guest today, this is Caveman Clauss, one of our traveling journeyman superathletes who's relocated to San Francisco to shake things up. One of the things that he does in his free time is [dancing]. He is a West Coast swing badass. That's right. West Coast swing. Now, I feel about the dancing. I love the dancing. One of the things that happens, though, is that Clauss good athlete forced to dance, forced in this high heel on his toes for hours, hours at the time.
One thing that happens is that he ends up critically short all the time, right in this area of suprapatellar pouch (an area above the knee). 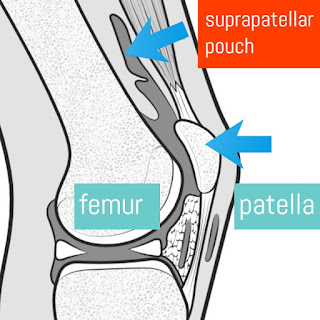 Traditionally, we'd take a ball and try to tack and stretch this area above the knee. We elaborate on some of the concepts we've been working on. And this is compression tack and floss ( compression band flossing). And so we're going to create a large compressive force through those tissues. And then we do squats and it's going to just blow open those tissues. We want to try to mimic the actual movement with the mobilization...
So with Clauss, we've got him wrapping compression floss band right to the base of the patella. This is one of the Dick Hartzell PT strength strips. We've talked about this before. And I want to get a little bit closer to patella, so that he locks it over and then he's going from the inside out trying to just open up those tissues...

So the issue is, though, as he moves to that full range of motion, it really ends up challenging the limits and everything that's restricted in there is going to be tacked. It feels awkward. You have to really work through that tight voodoo band compression. Do 20 reps.

Squatting without compression floss bands to feel the difference.
Definitely feels a lot better. Turn to us and squat so that we can see a difference. What you notice is that when the leg is short in the front of the quad, remember that only the rectus femoris goes from knee to hip. And so, if the rectus femoris is tight, we'll see it reflected in hip extension kind of things. The rest of the quadriceps are related to this range. And so one of the ways that short quads manifest themselves is with knee coming in. 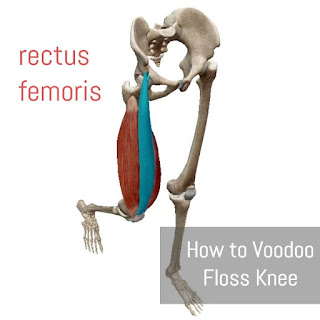 So one of the pathognomonic cue is that when we have short ones, one way to shorten that distance here and here is to have that knee be able to come in. This is one way to open up those tissues to make it easier to keep that knee out. Let's see what that position looks like. And does that feel different left to right in terms of getting knee out? In fact, it looks a little bit better on the right side, but that could just be confirmation bias, which I'm all about. Checking the things that work should work. Get a PT strength strip, start tacking and flossing.

Another demonstration of knee voodoo flossing by Kelly Starrett

The key is it's also just a grip here. But because we're compressing the joint, distracting the joints, adding the rotation of the tibia, the internal rotation of the tibia on the femur with the extension into the ground, it's a big whammy.
And look, we have an athlete who's very, very strong super jock. We need a good set of tools that are safe (a single high compression floss band). We respect his numbness and tingling. He just goes as long as he can. A quick two or three minute bout of this, you know, loosens this back up. Just feel how this feel different than the other one? A lot. I notice it more at the top of the kneecap to the top of the patella, I guess.
knee
knee 7253563993132638790