https://www.floss-bands.club/2018/03/voodoo-floss-band-for-knee.html?m=0
This is the report of a physical therapist Andreas Ahlhorn describing the effect of a compression flossing on acute knee pain in clinical practice.

"Christoph, a 20-year-old professional footballer, had to stop his morning workout due to sudden right knee-joint pain. Due to a cruciate ligament tear, an internal meniscal lesion and an internal ligament rupture, he underwent minimally invasive surgery three years ago on the right knee.

The clinical examination showed a clear limitation of the active movement: extension / flexion 0-5-110 with pain in each case scored at 6/10 according to VAS (visual analogue scale). The passive mobility was slightly better: 0-0-120 with pain 9/10 in flexion and 7/10 in extension. He described the pain as stinging, mediocaudal (toward midline and below) on the patella front.

I wrapped the flossing band above and below the patella in the position of a slightly flexed knee joint.

Mediocaudally at the front of the patellar, I increased the tension of floss band a lot, so that I achieved about 80 percent of the maximum tension. The rest of the area I wrapped with 50 percent of tension.


With the band wrapped, I mobilized the tissue manually over the pes anserinus and moved the knee joint passively in flexion and extension. In addition, Christoph performed 15 deep squats at moderate speed and then 10 squat jumps. 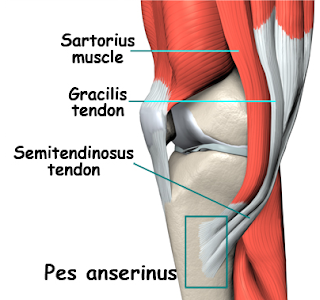 With the flossing band, the patient did not have the pain described above during these exercises. There was only pain due to friction from the floss band.


After I had removed the flossing bands for the first time, Christoph already felt a "lighter feeling" in the knee joint. After the treatment, the pain could no longer be triggered. The mobility was active with 0-0-125 and 5-0-130 passively. And the movement was painless in both directions.

In the evening Christoph could easily participate in the training again.

The patient had an acute injury to the myofascial system, which was probably aggravated or even induced by earlier scar tissue. I suppose I could solve some adhesions by using the Kinetic Resolve effect. The pain was probably reduced by the effects on the receptors and the sensitive system (subcutaneous irritation). The flossing band also increased the trophics in the affected area, so that the self-healing processes in the body were activated by the functional load."